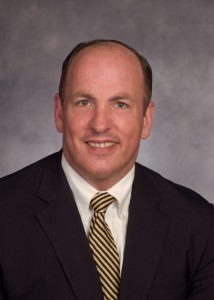 Senator Joyce was appointed to Senate leadership in January 2015 by Senate President Stan Rosenberg. As Assistant Majority Leader, Senator Joyce will help craft the Senate agenda and steer both the policy and fiscal debates of the legislative session.

Prior to joining the Senate, Joyce served in the Massachusetts House of Representatives as the 7th Norfolk District State Representative for the towns of Milton and Randolph. In 1997 he was elected president of his legislative class representing thirty-two new senators and representatives. Senator Joyce has a well-deserved reputation for working hard on behalf of the communities he represents and the people he serves. While focusing much of his current efforts on economic expansion initiatives, Senator Joyce’s priorities include: fiscal discipline, job creation, education, housing, public safety, and issues impacting senior citizens and persons with disabilities.

In addition to his legislative duties, Senator Joyce is a practicing attorney and Managing Partner of the Joyce Law Group, a thriving law firm with offices in three states. His firm has won significant legal decisions in the areas of workplace safety, insurance, and employee rights.

The senator is also involved in a number of charitable and civic associations. He is a member of the HESSCO Elder Services Advisory Council, the Stoughton, Easton, and Randolph Chambers of Commerce, the Neponset River Watershed Association, and the League of Women Voters. He is a corporator of Milton Hospital and Vice President of the Board of Directors of Fuller Village (non-profit senior housing). The senator has also coached youth hockey and baseball.

Senator Joyce is the recipient of numerous awards, including the Eva B. Hester award for his leadership on senior issues, the No Care Like Home Care Award for his outstanding contributions to seniors, the Barbara Henry Democrat of the Year Award, and a Legislative Award from the Massachusetts Coalition of Police for enhancing the livelihood of all Law Enforcement officers in the Commonwealth. He has also been named Legislator of the Year by the Massachusetts Police Association, and was selected by the College Board as a national Legislative Education Leader for his efforts to promote educational access, equity and excellence for all Massachusetts students. Senator Joyce was one of thirty-eight Americans selected for a prestigious 2002 Marshall Memorial Fellowship, and in 2003 was selected for an eight-member delegation to travel to China by the American Council of Young Political Leaders.

In 2005 he was named Massachusetts Town Clerks’ Association Legislator of the Year and was the recipient of the Neponset Valley Chamber of Commerce Government Partnership Award due to his extraordinary work in the area of regional economic development. Senator Joyce was honored by the Bristol Norfolk Home Builders Association, Inc. in 2006 for his outstanding service and contribution, and he was recognized by the Massachusetts Association of Chamber of Commerce Executives for his distinguished service as a member of the Joint Committee of Community Development and Small Business. He was also recognized as the 2006 National Association of Housing and Redevelopment Officials’ Legislator of the Year. In 2007 the senator was named Legislator of the Year by the Massachusetts Developmental Disabilities Council, the Arc of Massachusetts, and the Association for Developmental Disabilities Providers (ADDP) for his work on behalf of individuals with intellectual and developmental disabilities. The Mass Audubon’s “A” Award was presented to Senator Joyce in 2009 for his efforts in furthering the cause of conservation and environmental protection.

In 2010 he received the Common Cause Massachusetts Legislative Achievement Award in recognition of his leadership on behalf of the 2009 Ethics and Campaign Finance Reform Law. In 2012 he was named a “Great Eight” legislator by the Massachusetts Restaurant and Business Alliance, was honored with a Beacon of Justice award by the Equal Justice Coalition and received the Legislator of the Year award from the Crohn’s and Colitis Foundation. In 2013, Senator Joyce was given a Family Leadership Award from the Massachusetts Coalition for Occupational Safety and Health (MassCOSH). Finally, in 2014, he has received the “Voice of the People” Award from the Randolph chapter of No Place for Hate and “Legislator of the Year” from IREM.

Senator Joyce and his wife Mary reside in Milton, Massachusetts, where they have raised five children.